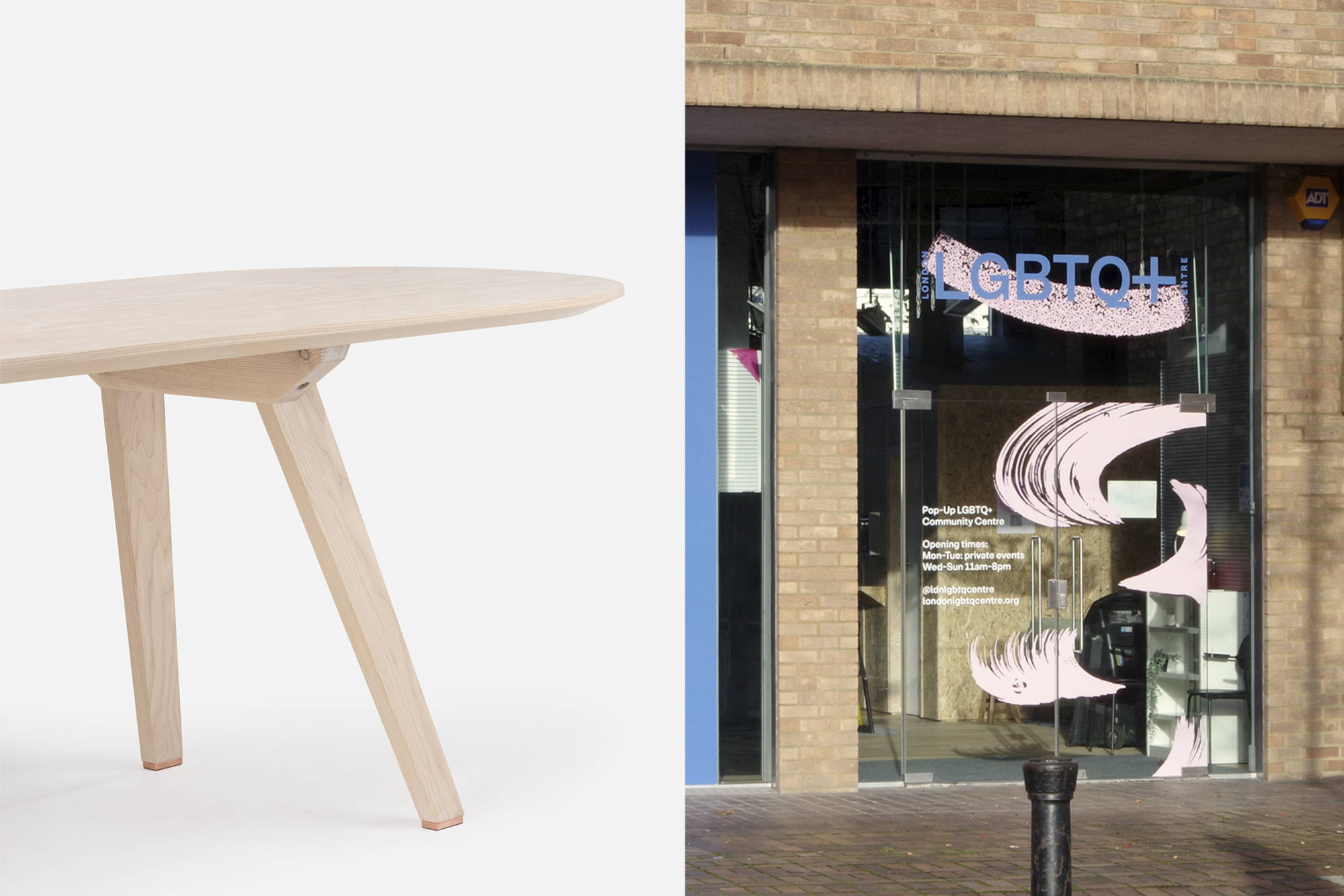 ”My main ambitions for the space were that it was flexible... Creating a space that the community feels they can take ownership of, make changes to, and make completely their own.”

Community is key to our health and wellbeing and, with the pandemic increasing social isolation, community is more important than ever. The London LGBTQ+ Community Centre is addressing this need, providing a safe, sober space to build connections, to reduce isolation through intergenerational contact, and to find health advice and services. Its entire design, from the physical space to the activities, was conceived in close collaboration with the wider community to ensure it could become a true, comfortable home for all to feel supported and be themselves.

Queer architect Martha Summers, who worked with the centre team on the design of the pop-up space, ensured the interior was designed to continually evolve in response to the needs of the users. She was kind enough to discuss her process with us.

”My main ambitions for the space were that it was flexible — working for a number of types of events and uses but also flexible in terms of not feeling fixed and too ‘designed'. Creating a space that the community feels they can take ownership of, make changes to, and make completely their own,” says Summers. “One great thing was having all this donated furniture that was loose, rather than built in, and all quite lightweight, meaning it can be easily picked up and moved around by visitors.”

A true community project, the centre was created by the community it serves. Martha Summers, who donated her time and expertise to the project during hours outside of her full-time job, worked with the centre team to, in just 5 weeks, complete the design and build. “I assembled a team of LGBTQ+ builders, including an electrician and plumber, meaning everyone on site was able to work alongside others in their community — which is something so rare in construction, and also that the space was literally built by the same community who will use it. Even as an architect it felt genuinely healing to work on a project where my gender presentation was irrelevant to how the people I was working with treated me.”

The centre was made possible by thousands of people working together toward a common goal: hundreds of volunteers have contributed time and expertise since the project’s inception in 2017, Southwark Council helped the team source the pop-up location, and the centre was funded by both the National Lottery and a crowdfunder campaign supported by over 2000 people. The space was furnished with donations from contemporary design brands with the help of communications specialist Sabine Zetteler. 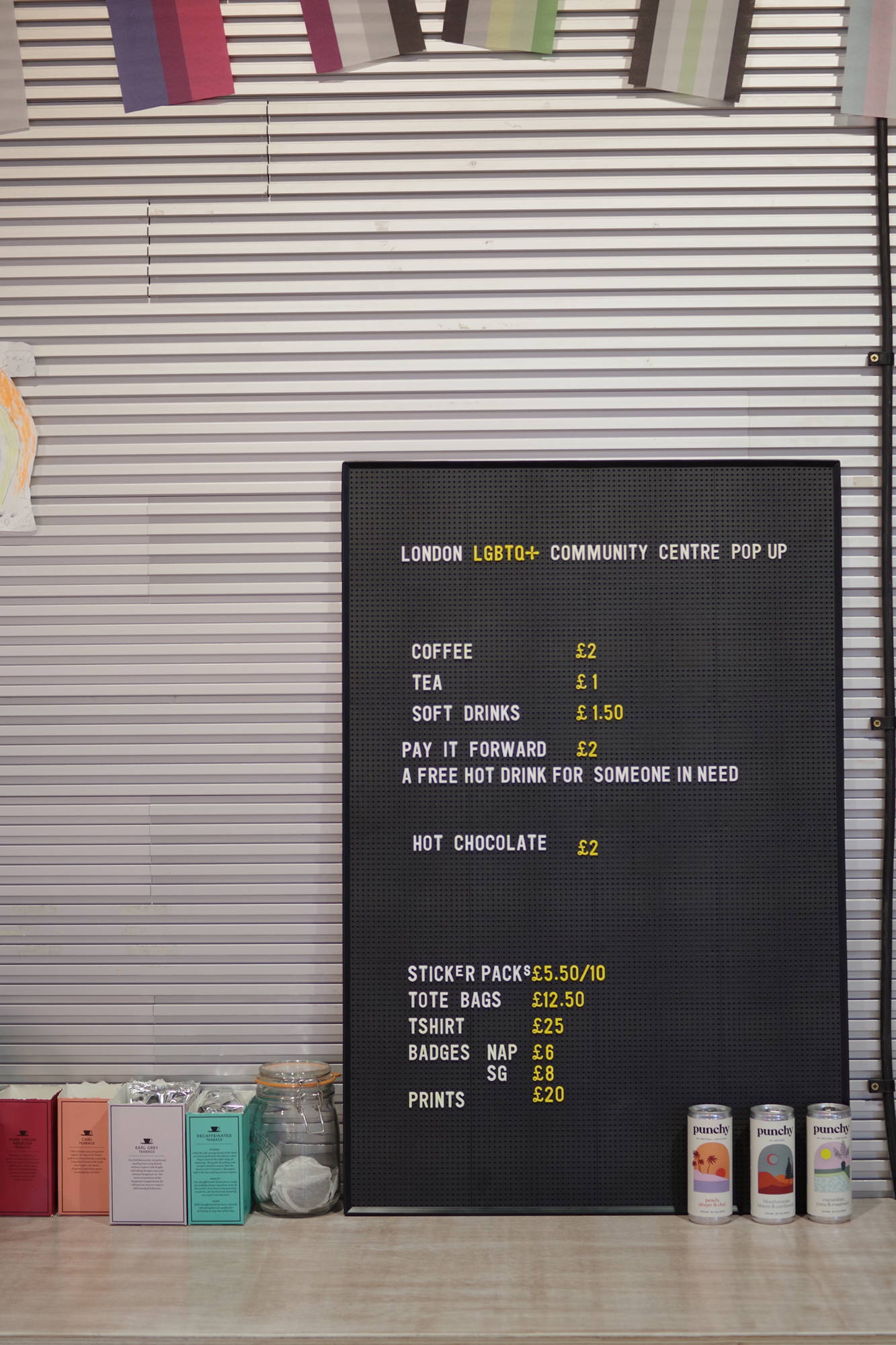 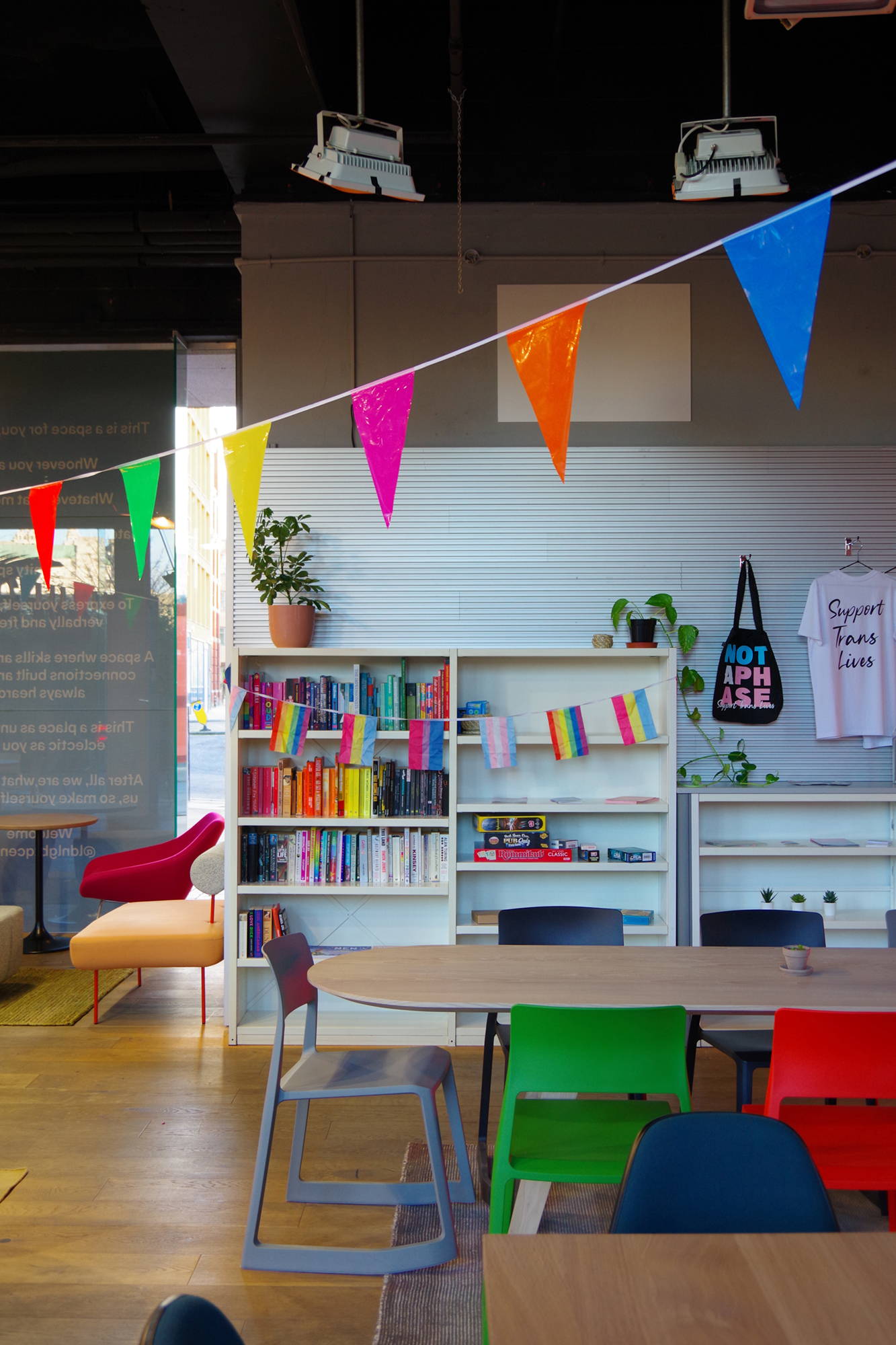 De La Espada are proud to have supported the centre with the donation of a Together Table, a piece that seemed like a natural fit for the concept as it was designed by Studioilse around the idea of community and warm, shared spaces. The narrower body brings people physically closer while the rounded ends encourage people to squish around the edges — always room for one more.

Summers sees the diverse furniture designs as an asset, as “it feels more like a big house where everyone's brought their own chair.”

Important to the centre team was the issue of sustainability — all of the donated furniture was ex-display or used — and reuse was key, even extending to making the most of elements that are less classically beautiful: “The shell of the space used to be a shop, so it was covered in aluminium slat wall when the charity signed the lease…we kept the slat wall because it also has the potential to be really interesting and useful: there's hundreds of different fittings you can get for it, to hang T-shirts, leaflets, shelves, you name it — meaning the walls of the whole centre are totally customisable. And it was also an environmental decision — it's been reused instead of scrapped,” says Summers.

Located near the Tate Modern, next to Blackfriars station, the centre provides a cafe, lounge space, social space for events, and LGBTQ+ specific services including mental and physical health and wellbeing. A quiet room at the far end of the centre accommodates private services and meetings of small groups, while the rest of the centre is open plan, allowing for a variety of configurations to suit each activity. The centre is inclusive, intersectional, and affordable for all — it holds regular pay-as-you-can events, and everything in the cafe is £2 or less, with the option to purchase coffees for those who cannot afford to pay.

The centre is a temporary pilot open for 6 months while the team works toward a permanent space, and the way it is used will inform the next design: “I'm really keen that the pop-up is used as a way to learn lessons for a permanent space. I photographed it carefully after it opened, and will be interested to do so again at the end of the six months, to see how it has changed and grown," says Summers. "What we could do architecturally with the time and space available for the pop-up was limited, but I'm super keen to keep observing how the space is used (and not used!), and let that inform the brief for a permanent space.”

“It can be really challenging to work on community projects because of financial and time constraints, but what's really exciting is that you can work in ways that are much less traditional and there's the opportunity to test radical ideas with like-minded people in way more collaborative ways.” 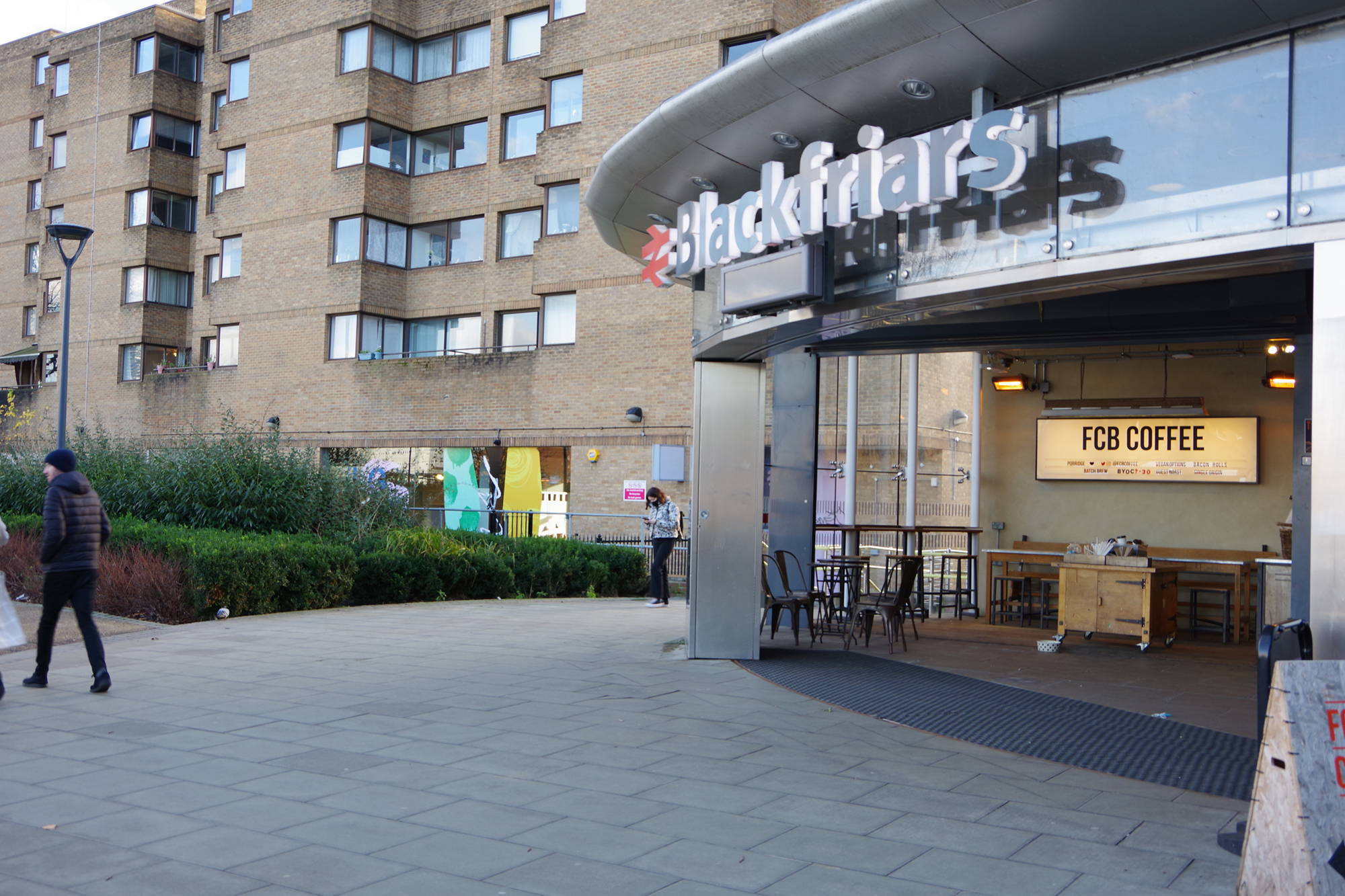 Find out more about the London LGBTQ+ Community Centre, including upcoming events and how to get involved, here.

Update July 2022: Following the success of the trial period, the London LGBTQ+ Community Centre will remain in this location for a minimum of 5 years. More here

SHOP THE TOGETHER FIXED TABLE 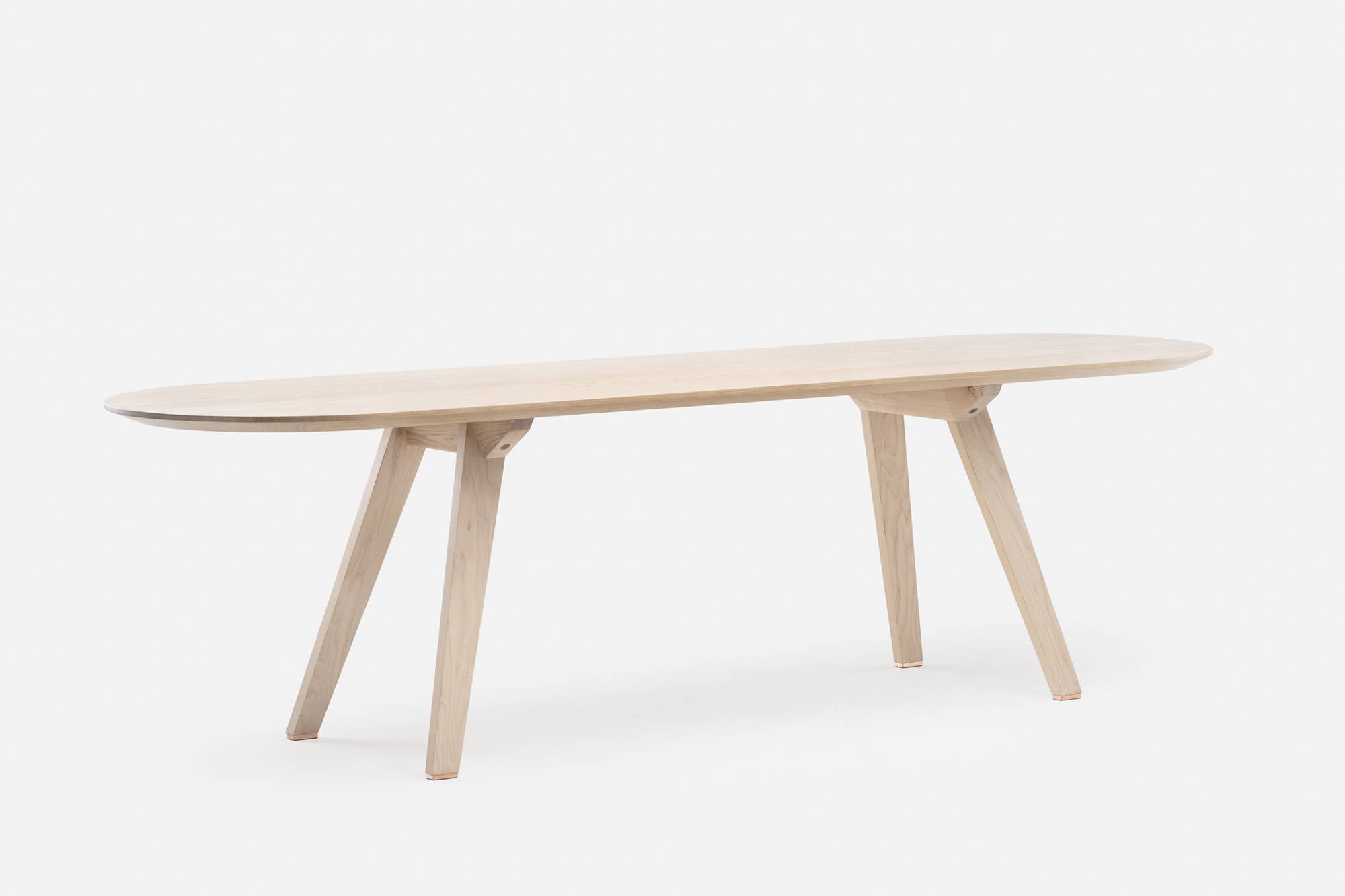